I worked with Lain and the other Liz (as I endearingly call her) to create a part of the class Rube Goldberg Machine. We came together with lots of different types of junk including: a printer, a garage band drum set, blender, hotplate, lamp, and i think a keyboard. Non of us had any sense as to what we could work with or what parts we were looking for, so we took everything apart, and really only ended up using the printer. The loop that shifts the cartridge from left to right is what we used; when it was dropped that started the rubber belt on the printer, which when it reached the end, would pull into another machine. We had trouble getting it to drop, so we used an old orange juice bottle to prop up the cartridge container, and when someone punched it out of the way (or in the final sequence, when another machine’s force knocked it out of the way, the piece would drop on conductive aluminum foil and that would start the rubber loop

The Machine in totality was kind of a failure, but fun to attempt.

For the second project Kate and I found an old radio that we wanted to get to play podcasts. We were using a potentiometer that would read every 100 intervals on the  channel knob. These would potentially trigger 10 different stations that would play from shoutcast stations in iTunes. Unfortunately the first radio broke, so here are pictures of the second. The potentiometer on the second radio never attached securely, so while out programming was good in arduino to max, we didn’t get the actual radio to work. In retrospect we should have left the potentiometer out of the radio, and manually turned it to trigger the radio.

Here are some pictures.

For the third project Kate and I somehow wanted to reuse the radios that didn’t work in the last project. We decided to create a broadcasting system for two reasons: first, Radio like this historically were the main source of information and entertainment, and the people who’s voices were heard were limited…i.e. so were the stories and news shared. Nowadays there is a plethora of ways to share worldwide–through blogs, podcasts, youtube, vimeo, twitter, etc. We wanted to showcase the widening of opportunities for broadcasting and sharing information. Also, because the 12th floor has issues with sound–everyone can here everyone, we were attempting to create a platform for those who really had intentional messages for the entire 12th floor.  TO do this, we hacked into talkie talkies, one was attached to the speakers of the old radio, the other was cleverly hid within a “microphone”–an old iPhone box we painted and used old speaker material in order to create a vintage feel. This worked! although the radios also had the inclination to pick up taxicab signals. Though a little bit messier, and I think kate and I were happy that we got a project to work, rather than repeat our arduino and pomp failures of the past.

Here are some pictures: 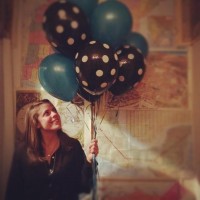